With the opening of the Saturday Market (forgot to buy snap peas on Thursday? Nooo problem!) there's plenty to write about, and I will get to all of it, but I've set aside this post to talk about my adventures with Cary Therriault of Cascade Natural Honey, who will put in his first appearance at this Thursday's Market, if all goes according to plan.

The eight-year-old and I caught up with Cary at the City of Bellevue's Larsen Lake Blueberry Farm, where Cary and friend Brandon's bees had been at work the previous four weeks pollinating this season's crop. This, after having returned from California where those--yes--busy bees tackled the almond blossoms. Next on the agenda? Fall City Farms' raspberries. 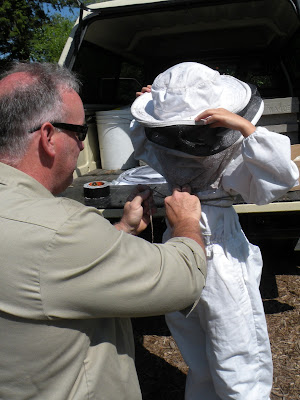 Bees and honey are Cary's heritage. His dad kept backyard bees in Monroe, and, because Cary's own son learned at his father's knee, Cary was able to outfit my daughter in this mini beekeeper outfit.


Q: Why are beekeeping outfits white?
A: So we aren't mistaken for bears. (Think Winnie-the-Pooh and Little House in the Big Woods)

While the child and I were hatted and gloved and taped (I was wearing impractical shoes), Cary slapped a hat on, filled his smoke can and called it good.

Q: Why do beekeepers puff smoke on the bees?
A: To keep them calm.

Cary could tell the different between relaxed, going-about-their-business bee buzzing and hey-what-are-you-doing-here-you-aren't-going-to-steal-our-honey-are-you buzzing.

We checked up on many of Cary's 180 boxes of bees(!), looking for bees getting too crowded, how the populations were doing, and how honey production was faring. When conditions get too cramped, bees naturally swarm and repopulate.


Q: How can you tell if a cell contains a future Queen Bee?
A: It bulges out in a peanut shape.
Cary broke one peanut shape off at one point, to transfer the queen to a future box.


I tried to get a picture of the bees when they return to the hive after a busy day of pollination because all the pollen sticks to their teeny legs (Cary said something about them storing it in "sacs"), and it makes them look like they're wearing cunning little yellow pants. So cute, as bees go. They take the pollen from their legs, mix it with honey, and feed it to their young.

But, you may be wondering, what about the honey?

It turns out, when Cary pulls out a tray where the bees have been making and storing honey, the difference is obvious. Check out the white beeswax:

And look at the beautifully geometric cells made by the bees!

Cary pulled this one out for us to sample. All I can say is, after seeing how much work it is to tend bees, and how much work those little bees put in, in their turn, it seems a shame to steal their honey. But my qualms only lasted until I actually got to taste some of the blueberry honey, straight from the comb. Sweet, fragrant, rich, delicious. Like tasting a summer afternoon.


My daughter spent the drive home licking honey off the cardboard box and making blissful sounds.

My other take-away was that producers cannot charge enough for real honey. Cary admits that there's more money in providing pollination services than in collecting and selling honey. The "honey" imported from China and other suspect places, the kind found in processed foods and plastic squeezeable bears, cannot possibly be as cheap as it is, if it's genuine. There's no way to automate the process, or make beekeeping less labor-intensive. If you're interested in my past research into fake honey, check this post.

Not to mention, once you've tasted real honey, there's no going back. Pick up a jar of local honey this week and thank your beekeeper!

Posted by www.christinadudley.com at 10:24 AM